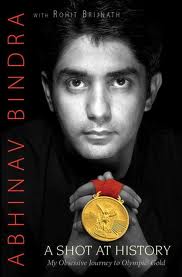 This is the story of Abhinav Bindra, India's only individual Olympic gold medalist. I bought this book because of Rohit Brijnath, the best sports writer in India, in fact one of the best in the world. I can see his influence in this book.He is the one guy who will makes you to read the whole story without making you get bored.A pure writing genius.

Comeback to the book,Abhinav is very honest and comes out of his comfort zone and discusses many aspect of his game -Shooting.For me it was a learning experience of a game which i have never interested before.Bindra tried every possible ideas and techniques over the years to perfect his art. From drinking Yak milk to Military Commando training , he undergone everything.Even though he did not receive enough support from Indian officials ,he did not give up but it made him to work harder and prove his talent.

His coaches and parents played vital role in his success.His parents were full support to him irrespective of his results.His German coaches nurtured him like their own and he was able to adopt their style of coaching.Like Sachin , he also tries to get into the 'zone' before every shot.I think each and every athlete have their own zone ,which gives them clearer picture of his mental state and clarity in their action.Uwe , one of his trainer wrote a beautiful letter after Abhinav's disappointing Athens Olympic games, the following lines shows how good he was and whats need to be done to be successful next time.

In the  penultimate chapter "Mr Indian Official:Thanks for Nothing", Abhinav sums up the state of Indian sports particularly the manner in which managers and officials treat the players.In one paragraph he summarize it :


"It was athletes often touch the feet of officials in India,I am a traditional Indian, but that seems plain wrong.As if the athlete is accepting his future lies in official hands,instead of in pure performance.As if the official believes he controls the athlete.It sets the wrong tone for the relationship.This is supposed to be an equal relationship not a deferential one.Eventually, only scores matter , not patronage."

He also acknowledges that his parents are well financed to support him but the money alone can not bring success.He worked really hard for his success.This is the lesson an athlete must learn, to experience and enjoy the journey not just the success.

A must read for aspiring athletes.I hope in London Olympics 2012 , India will win more medals than the previous Olympics.

*Boxed quotes are taken from the book.
Posted by sasitharan at 9:32 AM

Email ThisBlogThis!Share to TwitterShare to FacebookShare to Pinterest
Labels: Books